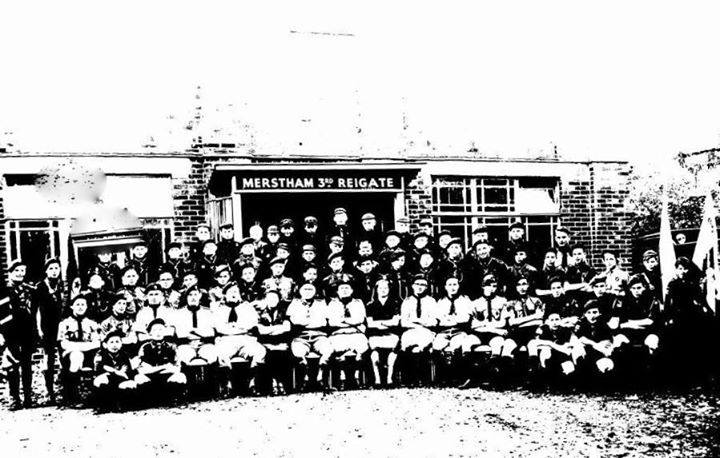 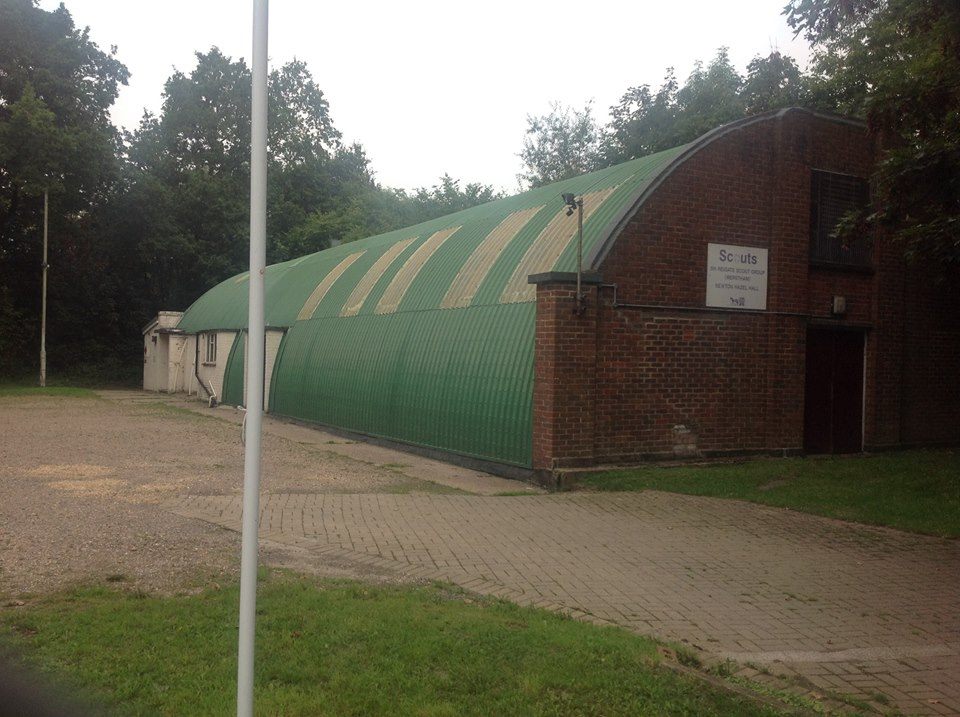 The old photo of the 3rd Reigate was taken where the large hall is situated now.

Celebrating 100 Years of Scouting in Merstham

In 2010, the 5th Reigate Scout Group celebrated 100 Years of Scouting in Merstham.

The 3rd Merstham Scout Group was founded in 1909 by RJ Jeffries and met at the Parish Room in South Merstham for a short time.

The group was a church group, linked to St Katherine’s church. Around the same time there was another troop in Merstham who in 1910 merged with the 3rd.

In 1910, Newton E. Hazel ran the troop and the new headquarters was in a large building provided by the Red Cross Surrey V.A.D and was situated in the grounds of the Rectory. It was officially opened by Sir Jeremiah Coleman in 1921.

In 1914, at the outset of war, Miss Rosamund Woodhouse took over the running of the troop.

Miss Woodhouse formed one of the first Cub Packs in 1915 and carried on running the Cubs and Scouts through the war years and until 1921.

[A note for purists: Although the official centenary of Cub Scouts is in 2016, we believe that some "experimental" Cub Scout Packs were set up in the few years preceding 1916.]

In 1924 she married Captain Morris who served as a Scoutmaster.

Over the years and during the war years the group played a prominent part in the community and the district events.

Their uniform was blue shirts and shorts with a red scarf.

5th Reigate Scout Group - The original group was formed in 1921 and was situated at the Provincial Police Orphanage, located off London Road, and now the site of the East Surrey College.

The 28th Reigate Scout Group were formed in October 1923 and met initially in the Mission Hall in Monson Road, Redhill. The group was linked to Holy Trinity Church, Redhill. In 1932 the 28th moved to Alpine Road, Redhill.

Local man Charlie Warren was for many years a well-known Cub Leader.

The site is now residential housing next to East Surrey College South.

The group scarves were dark blue with a red border and a Borough of Reigate badge in red & blue.

The 4th Reigate Scout Group was formed in 1952 by Father Clark and Derek Wheels.

Father Clark lived locally at 114 Nailsworth Crescent.  Derek Wheels who had come down from London.

It was a church group linked to the Epiphany Church and was situated on the new London County Council estate in Merstham. They met at various
locations including the Church, Albury Manor School and Albury Manor Old Farm House.

Derek Wheels (who is known as Brock) currently lives in Hampshire where he is running a local Scout Troop, but we meet up with him every few years at Scoutabout.

The 5th Reigate Scout Group was re-instated in 1966, with the amalgamation of all the above groups.

In 2002, under the chairmanship of local GP Dr. David Aslett, the group raised a substantial amount of money to pay for a new roof to the hall.

So we have a direct historic family tree stretching back over 100 years of Scouting in Merstham.

We should be very proud of this heritage.

Over the years a number of families have contributed by providing leaders and keeping the group running through the good and bad times. For their efforts, we all owe them a debt of gratitude.

One of our Cub Packs is called the Clark Pack in honour of Father Clark, who founded the 4th Reigate Scout Group in 1952.

Before closing in the early 2000s, our second Cub Pack was called Warren Pack, after Charlie Warren, who ran the Cub Pack at the 28th Reigate Scout Group for many years.

We must make special mention of the Gibson family, especially Cliff and Doris, who over the past 40 some years were the mainstay of the 5th.

Our Monday Cub Pack is known as the Gibson Pack in their honour.

Doris Gibson ran the Cubs for a number of years and is still fondly remembered locally.

Cliff Gibson, our oldest and deeply respected colleague was a Scout Leader in 1972.

Two years later he was asked if he knew anybody that would take on the role of Cub Scout Leader, he replied "Yes, my wife [Doris] would love to do that", so she started up a Cub Scout pack.

Later that became two Cub packs, meeting on a Monday and Tuesday, with a maximum of 36 boys in each pack.

At one point we had three Cub packs, with the third meeting on a Thursday.

Many of the current leadership team learned our trade from Cliff and Doris and still hold them with great regard and respect.

Doris stayed with the group until her death in 2010, she was well known in Scouting and the community as a whole.

Her husband Cliff was a much valued asset to our Group, helping with everything and doing anything he was asked until he sadly passed away in December 2012.

Portraits of both Cliff and Doris hang in the small hall at the Scout Hut, keeping a kindly eye on us.

Our present Headquarters site was built on land given to the Boy Scouts of Merstham by Mrs. Topham Richardson of Harps Oakes Lane.

The current buildings were built in the 1950s by friends, parents and members of the Group. Many of them were Rover Scouts.

The main hall was originally part of a Marks and Spencer storage facility at Southampton.

A parent in the group, through his business connections, had it dismantled and transported to Merstham and erected by the group.

The Mayor of Reigate Alderman Searle declared the building officially opened on the 17th May 1958.

Attendees at the opening included one of the early founders of the group, Mr Newton Hazel.

Alderman Searle agreed to act as one of the four trustees for the premises and the land.

The block floor in the main hall was purchased by the group from Enfield in the 1960s for £100.  It is still in place 50 years later.

So, that is our history as we know it.

If you are an ex-Scout, Cub, Leader or Parent who has been involved with the 5th in the past and have any memories,

articles or photographs, please contact the Group GSL team This email address is being protected from spambots. You need JavaScript enabled to view it.

We will be pleased for any information you can supply which will help us fill the many blanks in our history.

Don’t be shy we would love to hear from anyone who can help.